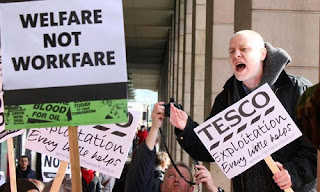 MORE protests are being organised across the UK against the workfare scheme that forces people to work for nothing and subsidises wealthy corporations.

The news comes after a high-profile protest in London on Saturday when the Westminster branch of Tesco was forced to close.

Says Boycott Workfare, which has called the day of action for Saturday March 3: "So many high street stores are involved in taking on forced unpaid labour that there is plenty of choice – Tesco's, Asda, Holland & Barrett, Primark, HMV, and Topshop to name but a few. Get a group together, make a plan, and head to the streets.

"Workfare means that those who need welfare are forced into unpaid work for multi-million pound companies. Instead of a living wage, they receive only JSA – a tiny £53 a week for the under-25s – far below minimum wage.

"Workfare means those in paid positions may see their jobs replaced by this unpaid labour. Why would a company pay for people to do these jobs when they can get free labour from the Job Centre?

"We can put a stop to this forced unpaid labour – Waterstones, Sainsburys and TK Maxx have all recently announced that they would no longer take unpaid placements – the other companies just need a bit more encouragement to stop this exploitation.

"We demand an end to this exploitation and call for welfare rights and living wages for all! If you continue to exploit us we WILL shut you down!

"Let us know what you’re planning. The campaign is UK-wide!"

Details of March 3 actions:
Keep up to date with the global insurrection - follow VM on Twitter
Posted by The Vast Minority at 01:13