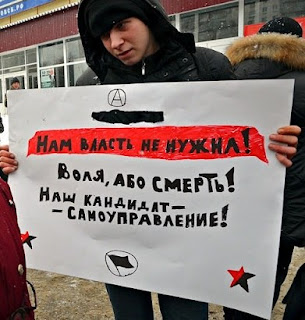 ANTI-FASCISTS in London are holding a memorial protest for a murdered Russian comrade.

A post on UK Indymedia announced that on Saturday 25th February activists will be laying a wreath at the International Brigades Memorial, Jubilee Gardens, London SE1 at 1pm to commemorate the fallen comrade.

It adds: "On the 9th of February 2012, a caretaker at the 'FIAN' institute found the body of 21-year old Anarchist & Antifascist Nikita Kalin.

"He had been stabbed 61 times, suffered a head wound and multiple fractured ribs. Police arrested a suspect in connection with the murder, a nazi activist, who had been found with Nikita's blood on his clothing. However, fascists seldom work alone.

"Due to the Police's handling of the case, Russian Antifascists believe the Police will attempt a cover-up, as is often the case in Russia. Despite this, the suspect has already hired a lawyer.

"Nikita's family and friends have a lawyer from a human rights organisation, but they still need money to help pay for the funeral. If you cannot make it to the memorial demonstration, please consider donating to the funeral fund via Moscow Anarchist Black Cross: http://wiki.avtonom.org/en/index.php/Donate

"Let's show Nikita's family and friends that they are not alone in the struggle, that we will never let fascism force us into submission and obedience.

"Bring flags, banners and placards . Never surrender to the fascist scum! We encourage all antifascists and radicals to join us."

Keep up to date with the global insurrection - follow VM on Twitter
Posted by The Vast Minority at 22:28