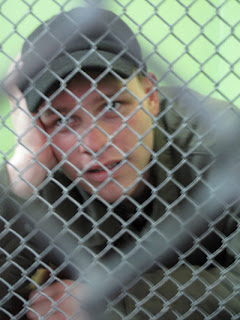 MARCH 15, 2012 has been declared a day of action in solidarity with imprisoned anti-fascist Jock Palfreeman.

Among other events there will be a rally outside of the Embassy of the Republic of Bulgaria in London (186-188 Queen’s Gate) at 11.00am.

As we reported in 2010, the Australian activist stood up to a gang of violent Nazis in Bulgaria.

"Jock ran to the boys' aid, he did his best to keep the Nazis at bay by waving a knife at them but they attacked him.

"Jock was left with nowhere to run and had no choice but to defend himself. One of the Nazis was stabbed and killed and another was injured. The Roma boys ran away.

"Jock has since been tried and sentenced for murder and attempted murder. He has been sentenced to 20 years imprisonment and has been fined £220,000."

Jock has written this open letter about his case.
Dear Comrades,
As of around August 2011 I have been convicted without right of appeal in the highest court of Bulgaria. I was left with a 20-year sentence in a maximum security prison.

However, what did change in the court’s decision was that unlike the first court’s verdict, the court of appeal ruled that there were Roma present and there was a “physical fight between the Roma and the group of boys”.

Seeing as the Roma were 2 and the “group of boys” were 15 the use of the word “fight” is being stretched. The neo-nazis from South Division Levski Ultras have denied that there was a “fight” with any Roma and even deny that Roma were there at all.

Yet the appeal court, although contradicting the neo-Nazis on this point, went on to claim that the statements from the neo-Nazis were truthful. Strangely the crux of the prosecutor’s arguments was that there was no fight between the neo-Nazis and Roma and there weren’t even Roma there, hence the accusation against me that I attacked them without cause.

This was also the excuse given by the investigator and prosecutor for not bringing the Roma to court as witnesses. Now, however, the court has ruled that Roma were there and that yes there was a physical fight between the Roma and neo-Nazis, but the court stops short at discrediting the neo-nazis as witnesses and made no attempt to find these “new” witnesses.

Until today the only evidence used to prosecute me were the statements from the neo-nazis themselves. There is no other [corroborating] evidence or witnesses to the indictment or court findings that I “for no reason attacked 15 men with the intent to kill them”.

I have not changed my explanation of events from the beginning, and they remain the same after four years of being kidnapped by the Bulgarian state. I witnessed the 15 neo-Nazis all attack two Roma due to the colour of their skin. I intervened to defend the two Roma. The 15 neo-Nazis then attacked me and I defended myself.

For these reasons and many more we are trying to revitalise the solidarity movement with my case and all the connotations that my case involves, i.e. racism, violent neo-Nazi gangs and their mates who defend them the corrupt police, corrupt courts and the corrupt prison system.

The neo-Nazis wouldn’t be able to attack people on the streets if it wasn’t for the protection afforded them by the police and courts. It’s telling when hundreds of the state’s agents are needed to stop me, a lone individual. However against their hundreds I have morality, I am right and they are in the wrong and this is why it takes so many of them.

I am putting out a call to action to all those opposed to racism both on the street and in its institutionalised form of fascism. This March 2012 organise yourselves to the Bulgarian embassies or consuls in your cities. Let the Bulgarian state know that the matter is [not] yet settled and that you don’t recognise the court’s decision to incarcerate me and protect the racists.

I am also trying to transfer to Australia to be closer to my family and to escape the persecution against me by the prison administration at the behest of those connected with my case. Yet the Head Prosecutor Boris Velchev and his lap dog prosecutor Krassimira Velcheva have already tried to coerce me into retracting my transfer request.

I refused to retract my request and as such the Prosecutor’s Office of Bulgaria is refusing to answer my requests, based on Bulgarian laws, to transfer to Australia.
March 2012 solidarity demands are:

• Jock’s case be re-opened due to missing evidence primarily the two Roma witnesses/victims.

• The neo-Nazis are punished for their past race hate crimes and prevented from committing more.

Solidarity to all my comrades both outside and inside.