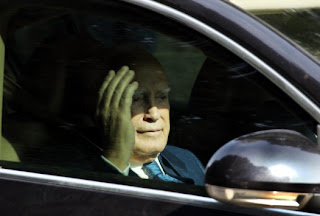 GREEK anarchists launched a daring raid on the home of President Karolos Papoulias.

A statement posted on Contra Info said about 60 activists attacked the personal guard, the guard booth and official vehicles outside the politician's residence.

Papoulias’ personal guard fled, and flyers were thrown at the spot in solidarity with the anarchists Stella Antoniou, Kostas Sakkas, Giorgos Karagiannidis and Alexandros Mitroussias.

The activists withdrew at a coordinated pace from the place, which is located at short distance from the police headquarters.

A few minutes later, a DELTA police motorcycle unit appeared, using flash-bang grenades in an effort to reach the protesters, but with no success.

The action was held in solidarity with Stella Antoniou and the other comrades accused in the same case, as a first response to the denial of her application for release on bail.

The statement said: "These actions will continue until Stella Antoniou is released from prison."

Other encouraging news is the occupation and self-management of a general hospital in northern Greece.

Wednesday February 8 is likely to see the confirmation of yet more 'austerity' measures to be imposed by the neoliberal global system on the Greek people, despite ongoing angry protests including a general strike on Tuesday.

Keep up to date with the global insurrection - follow VM on Twitter.
Posted by The Vast Minority at 23:16