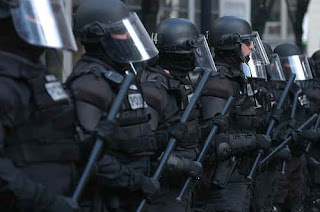 THE BRITISH state is planning to use chemical warfare against its own population, it has been revealed.

The news confirms the increasingly fascistic forms being assumed by neoliberalism as it struggles to hold down popular discontent with its corrupt system.

Reports The Independent: "Leading neuroscientists believe that the UK Government may be about to sanction the development of nerve agents for British police that would be banned in warfare under an international treaty on chemical weapons.

"A high-level group of experts has asked the Government to clarify its position on whether it intends to develop 'incapacitating chemical agents' for a range of domestic uses that go beyond the limited use of chemical irritants such as CS gas for riot control.

"The experts were commissioned by the Royal Society, the UK's national academy of sciences, to investigate new developments in neuroscience that could be of use to the military.

"They concluded that the Government may be preparing to exploit a loophole in the Chemical Weapons Convention allowing the use of incapacitating chemical agents for domestic law enforcement."