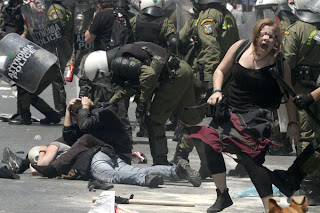 GREEK anarchists have called for international solidarity efforts, as they endure a new brutal wave of repression from the state and its neo-fascists guard-dogs.

Says a statement posted on From the Greek Streets: "Greece is at a critical turning point, and many critical changes are taking place in a societal as well as a political and economic level.

"The disintegration and dissolution of the dominant – until recently – model of power and exploitation is more than evident, so it defines what is commonly called ‘crisis.’

"What we are experiencing now is the total failure of a system that is unable to secure any longer the social consensus, thereby is engaged in a frontal attack that is unconditional and with no pretext.

"Initially, at the beginning of this condition which was called ‘crisis,’ the attack occurred in materialistic terms.

"With the devaluation of labour, the horizontal reduction of wages, the ‘flexible’ working conditions, the institutionalization of insecurity, the increase of the price of consuming goods and public utility bills, the increase of taxes and the cuts in welfare benefits.

"At the same time, the sale of public wealth to private individuals, the widespread police presence on the streets, the auctions, the rising of unemployment began…

"At the general strike of May 11th in Athens, once again thousands of protesters marched and voiced their opposition to the Greek government’s new anti-social measures which effect the workers and the majority of people.

"During the demonstration, while a big part of the protesters had passed by the parliament and were heading to an end, the cops attacked without provocation and viciously the most radical demonstrator blocks – anarchists and anti-authoritarians, neighborhood assemblies, rank-and-file labour unions, extra-parliamentary left – beating them with unprecedented savagery and firing hundreds of tear gas against them, until these blocks were dispersed. More than 100 demonstrators were hospitalized, while others underwent surgery.

"Solidarity has always been one of the value features of anarchists.

"We always count on solidarity to support our struggles and fight back the logic of isolation and retirement into private life promoted by the state power, and also the capitalist condition of individuation and dismantling of the collective notion.

"Now that the Greek society and the proletariat suffer a strain with unprecedented deterioration of living conditions, now that anarchists are under such an oppression that takes dimensions of actual attempted murder, now that the anarchist political milieu is being at the sight of state violence and fascist threat, we need to see our comrades around the world to call actions and stand in solidarity to our struggle; by organizing events, demonstrations, marches, protests, by writing texts, via words and actions; anything that the comrades deem most appropriate; any expression of revolutionary solidarity that only anarchists know and want to demonstrate, will vitalize our spirit and strengthen our struggles."

Keep up to date with the global insurrection - follow VM on Twitter
Posted by The Vast Minority at 23:13