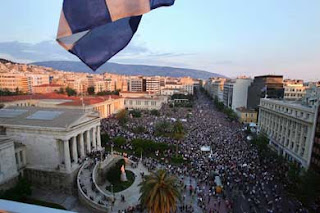 BIGGER numbers than ever have packed the centre of Athens for the seventh night of the real democracy protests.

Reports From the Greek Streets: "According to corporate media and blogs, about 50,000 people participated in the rally in Syntagma Square.

"Thousands of people still there at the moment. Earlier the rally surrounded the parliament and a lot of demonstrators blockaded the gates.

"According to corporate media, police hesitated to attack to the people who blockaded the entries out of fear for riots from such a large crowd of people.

"People who noticed the ‘escaping’ MPs start chanting ‘thieves!’ ‘thieves!’. Earlier, professors of the University of Athens gave public speeches on the Propylea of the university in front of thousands people, supporting the rally of Syntagma.

"The speakers and the crowd marched from Propylea to Syntagma and merged with the ongoing rally there, while the people’s assembly of Syntagma Sq. carried on for seventh night."
Posted by The Vast Minority at 23:43