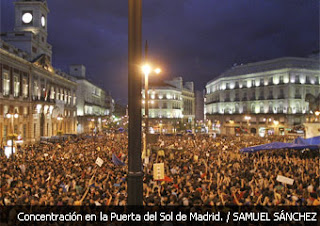 THOUSANDS of people defied both the protest ban and heavy rain to again occupy la Puerta del Sol in the centre of Madrid over Wednesday night.

Workers, unemployed people and pensioners joined young people in calling for an end to neoliberal 'austerity' measures and a democratic system based on the needs of people, rather than economics.

Spanish newspaper El Mundo explained that when the majority of protesters left the square at midnight, hundreds of young people again stayed on throughout the night, in a powerful gesture echoing the Tahrir Square occupation in Cairo.

Food was distributed free to anyone who wanted it and, while the weather put paid to the planned general assembly, debates were held on the future of the May 15 Movement for real democracy.

El Pais said that the protests had taken a big step forward. Whereas on Monday and Tuesday they had attracted younger people via social networking sites, on Wednesday older people arrived, having heard about the movement through traditional media.

The newspaper described a sense of 'indignation' in the air and thought it unlikely that the protests, which have also been happening across the country, would disappear before Sunday, which is a day of local elections.

The protests have also been featured on Fox News Latino.

The site reports: "Chanting a cry of resistance from Spain's 1936-1939 civil war, thousands of mainly young people thronged this capital's emblematic Puerta del Sol square Wednesday night in defiance of a ban on demonstrations ahead of weekend regional and municipal elections.

"Police, who forcibly evicted some 150 protesters from the area early Tuesday, stood by as the activists vowed to resist peacefully if authorities tried to dislodge them."
Posted by The Vast Minority at 23:14