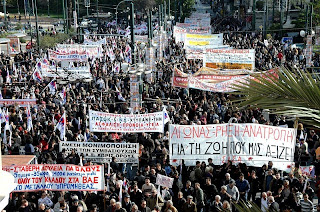 THOUSANDS of Greeks will take to the streets on Wednesday May 11 in a general strike and day of protests against neoliberal rule.

And live updates will be provided during the day by the excellent From the Greek Streets blog.

Reports The International Business Times: "Greek labor unions, students and others are planning massive a nationwide rally and general strike for tomorrow to protest the government’s austerity budget and deep spending cuts, as well as the imposition of European Union (EU) and International Monetary Fund (IMF) onto the country’s affairs.

"Two of Greece’s largest unions General Confederation of Greek Workers (GSEE) and Adedy will lead the strike. 'The strike is the workers' response to the problems faced by the unemployed, the workers and the pensioners who, according to the national plan on the economy, are again the ones who are called to pay the bill,' GSEE President Yiannis Panagopoulos stated.

"Last year, the Greek government accepted a huge 110-billion euro bailout from the EU and IMF to rescue its economy and reduce its tremendous national debt and budget deficit. In exchange for the loan agreement, the government of Prime Minister George Papandreou has imposed draconian budget measures, including social spending reductions, increased taxes, a freeze on wages for state workers, and public job cuts, among many other items."
Posted by The Vast Minority at 23:06