Fans and protesters united in Barcelona 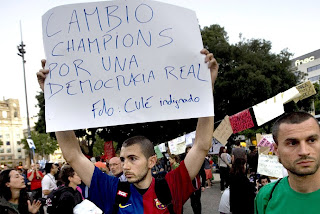 PRO-DEMOCRACY protesters and celebrating football fans merged convivially in Barcelona this weekend, despite scaremongering by the authorities.

The anticipated celebrations if the Catalan team beat Manchester United to win the Champions League had provided a pretext for Friday's brutal attempted clearing of the occupied Plaza de Catalunya.

But after the side's impressive victory, it turned out that there was plenty of room for everyone.

It also emerged that, of course, some indignados (protesters) were also culés (Barcelona fans) as this photo from El Pais shows.
Posted by The Vast Minority at 08:32