HISTORY is unfolding before our eyes, faster and more obviously than ever.

Capitalism morphs into fascism as its illusion of universal prosperity is exposed as the lie it always was.

Armed paramilitary goons in California protect Disneyland from residents of Anaheim angered by the way cops can kill their people with impunity.

And the London Olympics turn into full-blown dress rehearsal for a totalitaran police state, with even cycling now considered a crime if it threatens to disrupt the compulsory mass worship of money and power.

The symbolism is exquisite.

But all the gun-toting, law-passing and media manipulation will not stop the inevitable collapse of the toxic system which is choking this planet to death.

Half of India is brought to a standstill when the power grid fails for the second time in two days - 600 million without power.

And the capitalist dream of new consumer continents is fading, as brand new shopping malls in India and China lie half-empty.

There can never be a Disneyland planet of 10 billion happy Olympic-loving consumers - the neoliberal quest for endless growth and complete control cannot succeed.

But unfortunately capitalism is not going to end tomorrow. There is a lot more suffering ahead, a lot more misery, war and tears. And struggle as well, to ensure that the society that emerges from the ruins, the day after tomorrow, is one that will restore hope to humanity.
Posted by The Vast Minority at 12:14 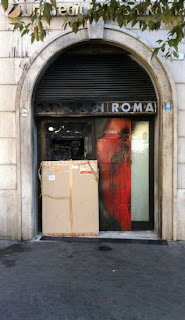 ANARCHISTS have claimed responsibility for firebomb attacks on two banks in Frascati, Rome.

A statement published on the 325 website states: "In the night of Wednesday July 18 2012, two banks were attacked in Frascati. Two molotov bottles and an incendiary device were thrown at the Unicredit bank and the BNL bank. Unicredit got completely destroyed."

The statement, signed off as being from the Informal Anarchist Federation and the International Revolutionary Front, says graffiti was left at the scene - an  encircled A and the slogan "The Earth is worth more than your money."

Explains the statement: "We can see and feel directly what they are doing to the Earth, to the animals, to anti-authoritarians, and this is sufficient to give a reason to our attacks, every time with more determination and strength… forward anarchists, let’s sabotage and destroy the present!"

It says the attack was "dedicated to those who are in prison, wanted by police, sentenced and searched…. to the anarchists hit by the repressive forces of the State/Capital."
Posted by The Vast Minority at 09:12 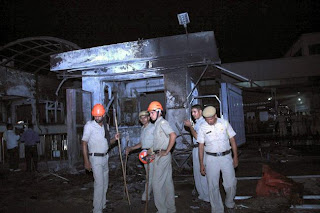 EXPLOITED workers in India have dramatically risen up and torched a car factory, leaving one boss dead.

The rebellion took place on Wednesday July 18 at the Maruti Suzuki plant in Manesar, which is now closed and in lockdown as the ruling elite in India, Japan and beyond reels from the shock.

Firstpost website reports: "A huge mob gathered outside the company’s gates in the evening at around 6 p.m. and torched the security office and the fire safety room at Gate no 2. Security guards of Maruti, who did not want to be named, say that there were at least 500 persons in the mob that set fire to the structures."

Writes one Indian commentator, R Jagannathan: "After caste wars, gender wars, regional wars and religious wars, one can now add the return of class warfare to the overflowing Indian cup of social tensions.

"In the land of a 'million mutinies', the violence at Maruti’s Manesar plant exhibits all the symptoms of class conflict. Even though attempts have been made to suggest that a casteist remark by a supervisor might have triggered the violence, this can only be a proximate excuse for the violence.

"All reports, in fact, suggest that the attack on supervisors and management staff was pre-planned, with workers stockpiling car parts to be used as weapons well in advance.

"Additional proof comes from a statement by Maruti’s CEO and Managing Director Shinzo Nakanishi, who clearly said that the violence was unlikely to have been the work of any outside force. Asked to explain the reasons for the violence, Nakanishi told The Times of India: 'We have to wait for the police investigations to get over, though I do not see any shadow of an outside influence this time'.

"It is significant that even as the government is looking for a Naxal link to the Maruti incident – and one need not be surprised if there is one, for the sheer savagery of the targeted violence suggests premeditation – Nakanishi did not offer this as an alibi.

"He probably suspects that there are broader reasons for the worker angst.

"Actually, there is. It’s called Speedy Growth. Whenever economies grow at very fast speeds – as the Indian economy has been doing between 1991 and 2011, and more recently during 2003-2011 –  inequality widens.

"It has widened in rural areas, which is why we have seen the rise of Naxalism, which needs a widely perceived sense of injustice to mobilise people against the state and the better off.

"Now, it is the turn or urban India to face the wrath of even the traditionally better off sections among workers. The average full-time Maruti worker gets around Rs 17,000 a month, but sees people around him who earn five times as much."
Posted by The Vast Minority at 09:00