This music video from Gentleman's Dub Club was released on May 20, 2013. Coincidentally, the Carnival Against Capitalism in London is on Tuesday June 11.
Posted by The Vast Minority at 10:21 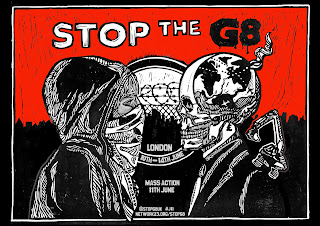 A MASSIVE wave of anti-capitalist resistance is set to hit London at the start of June.

The Stop G8 week of action ahead of the G8 Summit, featuring the J11 Carnival Against Capitalism on Tuesday June 11, is already worrying the British state.

One newspaper report says "the G8 protests represent a serious threat" and claims Home Secretary Theresa May is ordering in German water cannon, to be used on the British mainland for the first time.

It says: "Mrs May is concerned about thousands of anarchists and other protesters from North America and Europe converging on Britain next month."

A Home Office "source" is said to have told the newspaper: "There's an urgency to get the water cannons by the summer. Theresa May is actually pushing for it. The G8 is a worry for them."

There are a a number of protests lined up around London between June 6 and 14. Some anti-capitalists will be heading to Watford where the 2013 Bilderberg Conference is being held from June 6 to June 8.

UK Indymedia reports that the Stop G8 convergence "will begin on the weekend of June 8-9, with workshops and skillshares involving Green and Black Cross and Fitwatch in preparation for the J11 Carnival Against Capitalism on Tuesday June 11.

"There will then be an anti-militarist protest on Wednesday June 12 and a No Borders No Prisons! day of actions on Thursday June 13, while on Friday June 14 They Owe Us plan to appear somewhere in Canary Wharf, to reclaim and transform a space, bringing beauty and hope to the soulless heart of capitalism."

Stop G8 says the J11 Carnival Against Capitalism will be "a time to celebrate our resistance and our dreams, to bring music and colour to the streets. And also to show our strength and our anger."
Posted by The Vast Minority at 01:31 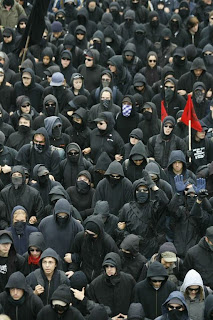 A PROMINENT activist in Occupy Wall Street has spoken out against "dangerous" criticism of the Black Bloc tactic by "violent peace-police".

David Graeber writes in N+1 magazine in response to an article called “The Cancer in Occupy,” by one Chris Hedges.


He tells Hedges in his open letter: "I am appealing to you because I really do believe the kind of statement you made is profoundly dangerous.

"The reason I say this is because, whatever your intentions, it is very hard to read your statement as anything but an appeal to violence. After all, what are you basically saying about what you call 'Black Bloc anarchists'?

"After all, if a group is made up exclusively of violent fanatics who cannot be reasoned with, intent on our destruction, what else can we really do? This is the language of violence in its purest form. Far more than “fuck the police.” To see this kind of language employed by someone who claims to be speaking in the name of non-violence is genuinely extraordinary."

Graeber pulls apart Hedges' claim that the Black Bloc tactic gives cops the excuse they need to attack protesters and depict them as violent.

He writes: "If the police decide to attack a group of protesters, they will claim to have been provoked, and the media will repeat whatever the police say, no matter how implausible, as the basic initial facts of what happened.

"This will happen whether or not anyone at the protest does anything that can be remotely described as violence. Many police claims will be obviously ridiculous – as at the recent Oakland march where police accused participants of throwing 'improvised explosive devices'—but no matter how many times the police lie about such matters, the national media will still report their claims as true, and it will be up to protesters to provide evidence to the contrary.

"Sometimes, with the help of social media, we can demonstrate that particular police attacks were absolutely unjustified, as with the famous Tony Bologna pepper-spray incident. But we cannot by definition prove all police attacks were unjustified, even all attacks at one particular march; it’s simply physically impossible to film every thing that happens from every possible angle all the time.

"Therefore we can expect that whatever we do, the media will dutifully report 'protesters engaged in clashes with police' rather than 'police attacked non-violent protesters'. What’s more, when someone does throw back a tear-gas canister, or toss a bottle, or even spray-paint something, we can assume that act will be employed as retroactive justification for whatever police violence occurred before the act took place."

And Graeber points out the even Gandhi, hero of the peace police, would not have taken the extreme line adopted by Hedges and his kind.

He writes: "Gandhi and his movement were regularly denounced in the media, just as non-violent anarchists are also always denounced in the media (and I might remark here that while not an anarchist himself, Gandhi was strongly influenced by anarchists like Kropotkin and Tolstoy), as a mere front for more violent, terroristic elements, with whom he was said to be secretly collaborating.


"And Gandhi was talking about people who were blowing up trains, or assassinating government officials. Not damaging windows or spray-painting rude things about the police."
Posted by The Vast Minority at 01:42