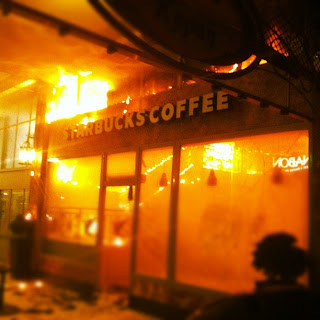 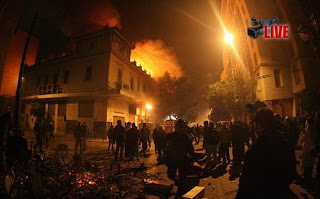 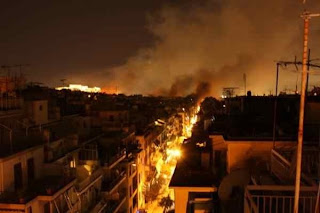 Says From the Greek Streets: "Tens of banks and other buildings are burning across Athens after today’s demonstrations. There are huge riots in Thessaloniki and Patra as well. The situation seems to be spiralling out of control."

Reports Reuters: "Historic cinemas, cafes and shops went up in flames in central Athens on Sunday as black-masked protesters fought Greek police outside parliament, while inside lawmakers looked set to defy the public rage by endorsing a new EU/IMF austerity deal.

"As parliament prepared to vote on a new 130 billion euro bailout to save Greece from a messy bankruptcy, a Reuters photographer saw the buildings engulfed in flames and huge plumes of smoke rose in the night sky.

"The air over Syntagma Square outside parliament was thick with tear gas as riot police fought running battles with youths who smashed marble balustrades and hurled stones and petrol bombs.

"Many businesses were ablaze, including the neo-classical home to the Attikon cinema dating from 1870 and a building housing the Asty, an underground cinema used by the Gestapo during World War Two as a torture chamber.

"As fighting raged for hours, protesters threw home made bombs made from gas canisters as riot police advanced across the square on the crowds, firing tear gas and stun grenades. Loud booms
from the protests could be heard inside parliament. 'Tear gas has reached the parliament chamber,' said leftist lawmaker Panagiotis Lafazanis.

"'Enough is enough!'" said 89-year-old Manolis Glezos, one of Greece's most famous leftists.'They have no idea what an uprising by the Greek people means. And the Greek people, regardless of ideology, have risen.'

"Glezos is a national hero for sneaking up the Acropolis at night in 1941 and tearing down a Nazi flag from under the noses of the German occupiers, raising the morale of Athens residents.

"'These measures of annihilation will not pass,' Glezos said on Syntagma Square, visibly overcome by teargas and holding a mask over his mouth."

Updates are still being posted on From the Greek Streets, though pages are not always available.

Here is the latest section of timeline:

00.22 A few hours ago, enraged demonstrators in the city of Corfu stormed the offices of the local ‘socialist’ MPs Gerekou and Dendias (an ex-minister of Justice), destroying them completely.

00.20 The town hall of the city of Volos is burning. Earlier, people had stormed the local tax office, destroying plenty of documents inside.

00.14 A demonstration has only just started in the city of Athens, with people roaming through the city’s streets and the police tucked away in the sidestreets.

23:07 Demonstrators attacked the Exarcheia Police station a few minutes ago.

23:45 Smoke from tear gas and burning buildings has covered central Athens. Clashes are still going on and the streets are full of people. Earlier, a lot of demonstrators tried to attack the house of the former Prime Minister Costas Simitis in the upper class district of Kolonaki (Anagnostopoulou st.)they clashed with the police units guarding the house.

Earlier a group of demonstrators tried to invade Acropolis police station. The police officers managed to protect the police station but several of them were injured while police vehicles in front of the station were burnt.

Early in the afternoon a DELTA motorcycle police unit, was trapped by demonstrators: people held a rope across the street throwing down the speeding motorcycles.

23.10 GMT+2 It is entirely impossible to estimate the number of people who have taken to the streets in Athens tonight. They are definitely in the hundreds of thousands – there are simply people everywhere.

23.07 GMT+2 The building of Marfin bank (the same building where three bank workers died on May 5, 2010) has been burnt to the ground.

23.02 GMT+2 Information about the alleged occupation of the town hall is confirmed: a group of people entered the building, only to be evicted and arrested by riot police a few minutes later.

22.42 GMT+2 The town hall of Athens has allegedly been occupied.