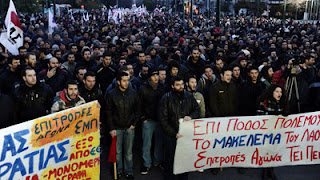 GREEK unions have called a 48-hour strike in protest at the latest punitive measures imposed on the country by the IMF and EU.

The minimum wage will be cut twenty two percent, pensions will be slashed and yet more jobs will go in the public sector.

Says From The Greek Streets: " On Tuesday, Eurostat announced that 27.7% of people in Greece already live below the poverty line.

"On Wednesday, the country’s official statistical service, Hellenic Statistics, announced that in November 2012 unemployment reached above 20% — all this only two years after the original loan agreement between the Greek government and IMF/EU/ECB."

For latest updates on Friday's strikes and protests against neoliberalism, see From The Greek Streets, ContraInfo  or Athens Indymedia.

Keep up to date with the global insurrection - follow VM on Twitter.
Posted by The Vast Minority at 23:22