Wall comes down as protests grow 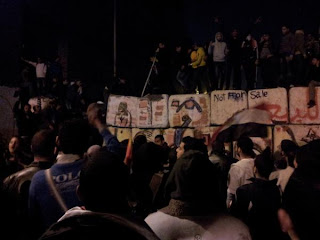 THE WALL came down in Cairo on Thurday night as anti-regime protesters broke through a massive stone blockade in Mohamed Mahmoud Street with a makeshift battering ram.

Ongoing clashes with police have been taking place in the capital all day, as Egyptians respond to the deaths of  nearly 80 football fans at Port Said.

Growing numbers of them believe the hand of the state can be seen behind the horrific events.

Crowds were reported to be shouting: "This was not a sports accident, this was a military massacre!"

Writes Mohamed El Dahshan: "It doesn't add up. Port Said's Masry soccer team won 3-1 against its long-time rival Ahly. In Port Said. It was a tough victory, one that Masry won with the support of its fans. The logical question would be, then, 'Why would the Masry fans attack the minority of Ahly fans among them?'

"From there on, the questions just don't stop. 'Why did neither the governor of Port Said nor its security chief attend a game they both normally attend?' asked parliamentarian Mohamed Abou Hamed on live television.. 'Why were security forces barely present despite knowing that the long rivalry between the two teams had a potential for violence?'

"On the streets and on the web, blame is put squarely on the police. Once again it failed miserably, as it has for the past year. Blame is also being put on the ruling Supreme Council of the Armed Forces, the SCAF, as the head of the executive branch."


This was not just the feeling in Cairo - Port Said residents are also adamant that the violence at Wednesday’s  match there was caused by infiltrators, not hardcore local football fans.

A handful of supporters of the Masry Football Club, which beat Cairo’s leading team Ahly 3-1 before the violence began, told Egypt Independent on Thursday that what happened the day before was the premeditated work of infiltrators taking advantage of an intentional security vacuum.

They pointed out that the gate between the stands and the pitch was left open, while at the same time the exit to the area where Ahly fans were sitting was kept closed.

At least 71 people died and more than 300 were injured in the violence Wednesday night.

Thousands of people gathered outside the Port Said governor’s headquarters by late afternoon, chanting, “Port Said is innocent!” and “This is the truth,” blaming security forces for the deadly violence.

“This is a conspiracy. We wouldn’t do this to our brothers,” said Mohamed Abdel Fattah, standing outside of the governor’s office. “The Ahly supporters were predominantly from Port Said. My brother was one of them. Port Said is sad today; all residents of the city are sad and feel as if their own relatives have died.”