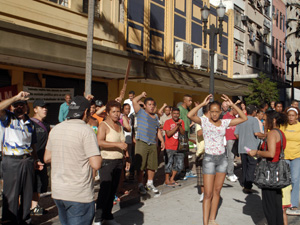 HOMELESS families have fought off police in Brazil's biggest city.

Some 230 families have been camped out in Avenida São João in central Sao Paulo since they were evicted from a building on the corner of Avenida Ipiranga on Friday.

On Sunday morning hundreds of police turned up at 6am to try and move them on, reported  Osmar Borges of the housing campaign group Frente de Luta por Moradira.

A  riot ensued,  with cops using tear gas and pepper spray. Several people were injured, including a lawyer and several mothers.

But the families succeeded in seeing off the police, who are said to be returning on Monday morning to 'resume the dialogue'.

Keep up to date with the global insurrection - follow VM on Twitter.
Posted by The Vast Minority at 11:09