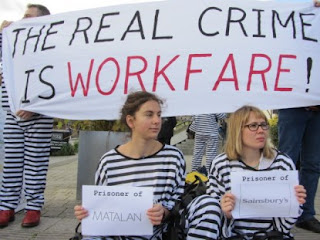 BRITAIN's neoliberal slavemasters are panicking over the public rejection of their workfare scam.

They are calling on police to "clamp down" on protests ahead of a national day of action on Saturday March 3.

And they are using right-wing newspapers like the Mail and the Telegraph to launch a McCatheyite smear campaign against activists and journalists who exposed the scandal.

The establishment clearly thought it had got away with bringing in 'work experience' schemes which amount to providing state-backed slave labour for private business.

But massive disgust and anger has spread across the country in the last week or two and a swathe of firms have pulled out of the arrangements in the face of public opinion.

The response of the British government, denying there is any real public opposition and calling for its police thugs to physically attack dissidents, confirms the convergence between capitalism and totalitarianism which is now being dubbed 'plutofascism' - rule by the rich imposed by force.