Neoliberal fascists on the attack 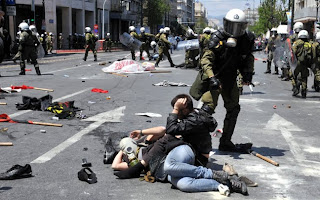 NEW battlelines are being drawn up in the global civil war of the early 21st century.

Neo-fascist street thugs are increasingly being mobilised by the neoliberal system to physically attack rebels.

In the UK this has been evident in the way that the EDL has moved beyond its original "anti-Muslim" justification to call for attacks on anti-capitalist protesters.

This week Greek neo-fascists not only killed a young Bangladeshi man but also helped riot police in their brutal assault on protesters during the general strike.

Reported From the Greek Streets on May 12: "During the last few hours, Neonazis have attempted to carry out anti-migrant pogroms in central Athens.

"Clashes between anti-fascists and migrants, on the one side, and fascists and riot police on the other side take place in the centre of the city while the rally in Propylea is starting.

"At about 18:25 several dozens of fascists assisted by riot police units attempted to attack the Villa Amalias squat near Victoria Square.

"The squatters defended Villa Amalias succesfully and forced the Nazis off the streets. Riot police responded with tear gas in order to make way for the Nazis to escape. Earlier in front of Athens School of Economics Nazis were chased by anti-fascists."

Meanwhile, American academic William I Robinson this week also warned of the fascist nature being adopted by the ruling system.

He wrote on Al Jazeera: "A 21st fascism would not look like 20th century fascism. Among other things, the ability of dominant groups to control and manipulate space and to exercise an unprecedented control over the mass media, the means of communication and the production of symbolic images and messages, means that repression can be more selective (as we see in Mexico or Colombia, for example), and also organised juridically so that mass 'legal' incarceration takes the place of concentration camps.

"Moreover, the ability of economic power to determine electoral outcomes allows for 21st century fascism to emerge without a necessary rupture in electoral cycles and a constitutional order.

"The United States cannot be characterised at this time as fascist. Nonetheless, all of the conditions and the processes are present and percolating, and the social and political forces behind such a project are mobilising rapidly.

"More generally, images in recent years of what such a political project would involve spanned the Israeli invasion of Gaza and ethnic cleansing of the Palestinians, to the scapegoating and criminalisation of immigrant workers and the Tea Party movement in the United States, genocide in the Congo, the US/United Nations occupation of Haiti, the spread of neo-Nazis and skinheads in Europe, and the intensified Indian repression in occupied Kashmir.

"The counterweight to 21st century fascism must be a coordinated fight-back by the global working class. The only real solution to the crisis of global capitalism is a massive redistribution of wealth and power - downward towards the poor majority of humanity. And the only way such redistribution can come about is through mass transnational struggle from below."
Posted by The Vast Minority at 09:59