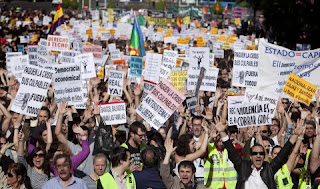 THE tide of youth revolt sweeping the Arab world has crossed the Mediterranean to southern Europe.

Protesters calling for a new political system have been taking to the streets of Spain over the last few days, organising via Facebook and Twitter hashtags such as spanishrevolution and acampadasol.

In an echo of the Tahrir Square protests in Egypt, they have been camping out overnight in prominent public spaces.

Although they have adopted a non-violent approach, the Spanish state has, of course, not followed suit and police violently evicted young dissidents from La Puerta del Sol in Madrid.

In response, the protesters - who reject all the mainstream political parties in the name of real democracy - called a new protest at the central square for this evening (May 17).

There were also calls for a camp outside the Spanish embassy in London.
Posted by The Vast Minority at 10:52