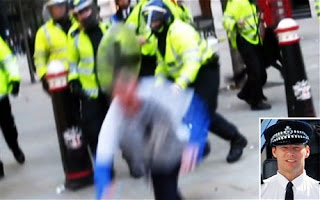 The Guardian reports that the jury's verdict said Tomlinson's death came after he was "fatally injured. This was as a result of a baton strike from behind and a push in the back by a police officer which caused Mr Tomlinson to fall heavily.

"Both the baton strike and the push were excessive and unreasonable. As a result, Mr Tomlinson suffered internal bleeding which led to his collapse within a few minutes and his subsequent death."

The paper adds that their finding noted Tomlinson, a father of nine, was walking away from police, obeying orders and posed "no threat" when he was struck by PC Simon Harwood.

Although the state is now reviewing the evidence for a possible prosecution of Harwood, perhaps for manslaughter, this may still not happen.

It is clearly not in the interests of the authorities to punish cops for doing what they are told to do - ie, intimidate opponents of the neoliberal regime and frighten them off the streets.

There seems even less likelihood that any action will be taken regarding the lies deployed by the police and their accomplices to hide the truth about Tomlinson's death from the public.

The police habit not just of violence, but of of fibbing through their teeth and getting away with, it is well known to much of the public, hence the wave of online anger directed at Harwood after the verdict.
Posted by The Vast Minority at 23:29