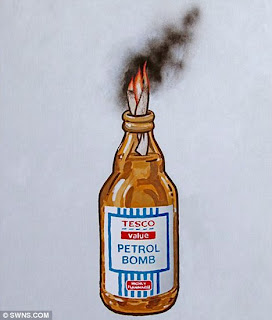 ARTIST Banksy has backed the Bristol uprising against capitalism and police repression by producing a controversial new image.

"The smoking device is stuffed with a flaming rag and labelled 'Tesco Value Petrol Bomb'. The artist will put the work up for sale just days after bloody battles over a new Tesco Express in the Stokes Croft area of Bristol - his home city.

"It is believed profits from the £5 poster will go towards funding the legal defence for more than 30 rioters arrested following the two nights of violence.

"Details of the drawing were released on the Banksy Forum website today, accompanied by a statement of behalf of the illusive artist. It also appeared on his own website - a sign the work is authentic.

"The statement read: 'After the recent Tesco riots in Bristol, Banksy has produced this fine commemorative souvenir poster.

'It's available exclusively from Bristol's Anarchist Bookfair this coming Saturday. All proceeds go to the Peoples Republic of Stokes Croft and associates'."
Posted by The Vast Minority at 23:14