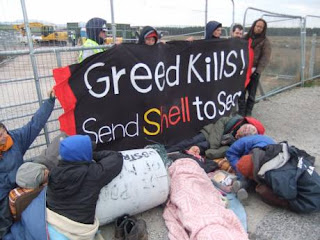 FOUR eco-campaigners were arrested at Rossport in Eire this week as work was stopped at Shell's compound in Aughoose for over seven hours.

Says a report on UK Indymedia: "At 7am on May 4, two people from the Rossport Solidarity camp locked their arms together inside a plastic and concrete barrel, which had been placed directly in front of the gates of of the Shell compound.

"The Gardaí who had been mostly calm during the lock-on, became very aggressive and reckless, immediately climbing on the borehole drilling rig and dragging one of the people down in a dangerous and foreful manner.

"The second person who was on the tractor cab was taken down about 30 minutes later again in a dangerous manner by having her hands handcuffed and her legs cable-tied and then being handed down a ladder by Gardaí. None of the Gardaí involved wore any ropes, harnesses or any safety equipment."
Posted by The Vast Minority at 22:37