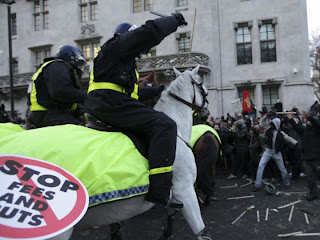 DEMOCRACY needs to be vigorously reclaimed for the interests of ordinary people, a Cambridge University academic has warned.

In a hard-hitting piece in The Guardian, Priyamvada Gopal writes: "Like everything else once held as a resource in common – schools, industries, utilities, woodlands, libraries and universities – democracy is turning into a feature of, for and by the market.

"The principle of bestowing citizens with the means to control their lives is reduced to rhetorical pieties about 'empowering' communities when local government funding is savagely cut.

"When real democratic expression from below does emerge, it is met with alarm and threats.

"Victorian broadsheet denunciations of the 'dangerous sentiments of the Democracy' were echoed in some media descriptions of recent anti-cuts protests as 'mob rule'.

"The 'kettling' recently faced by protesters outside parliament aptly symbolises current attempts to contain democracy and empty it of its real content – the interests of ordinary people.

"Only if it can be reclaimed by vigorously asserting the prior claims of we, the people, to the commons – our public spaces, our economic rights, our political processes and our shared resources – will demos (people) kratos (power) win the day."
Posted by The Vast Minority at 11:41