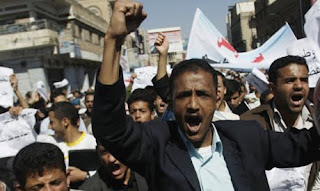 YEMENI students have demonstrated in the streets of Sanaa to mark the ousting of Tunisian President Ben Ali and call for Arabs to rise up against their "scared and deceitful leaders", reports Ahram Online.

About 1,000 students marched through the streets of the Yemeni capital of Sanaa on Sunday urging Arabs to rise up against their leaders in the wake of Tunisian strongman Zine El Abidine Ben Ali's ousting.

The students headed from Sanaa University's campus to the Tunisian embassy flanked by human rights activists.

They chanted: "Liberty's Tunisia, Sanaa salutes you a thousand times."

"Leave before you are toppled," read one banner, without naming Yemen's own President Ali Abdullah Saleh. "Peaceful and democratic change is our aim in building a new Yemen."

In power for the past 32 years, Saleh was re-elected in September 2006 to a seven-year mandate.

A draft amendment of the constitution, under discussion in parliament despite opposition protests, could further stretch the president's tenure by allowing a life-long mandate.
Posted by The Vast Minority at 08:39