Tunisian Revolution can inspire the world 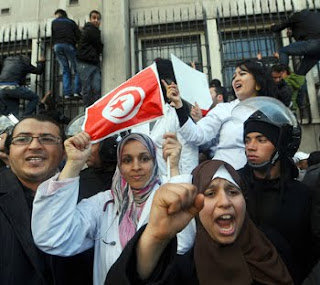 THE INITIAL phase of the remarkable Tunisian Revolution of 2011 is now complete.

Former dictator Ben Ali and his short-lived successor Mohamed Ghannouchi have now both been removed from the presidency and elections will be held within 60 days.

Remnants of the old regime's brutal police have yet to be completely cleared from the streets but it is now just a matter of time.

An excellent account of how the uprising panned out has been compiled by blogger Brian Whitaker at www.al-bab.com.

One of the most important aspects of the revolution is that it has genuinely emerged from below, without foreign backing or formal organisation.

Tunisia under Ben Ali was a police state, with total control of the media and censorship of the internet.

Police roadblocks, patrols and spies were everywhere and dissent was not allowed - and yet people still managed to pull off a successful uprising, partly thanks to the use of online social media.

It is also important to stress that although Tunisia is a Muslim country, this is not an Islamicist revolution.

It is a pro-democracy, pro-freedom, anti-corruption movement - more left libertarian than anything, inspired by trade unions, rap music, Che Guevara and "V for Vendetta".

It is also a very youthful movement - young men and women of the same generation as the students who have taken to the streets in Britain, France and Italy.

The greatest strength shown by the Tunisian rebels has been their amazing courage in the face of a despotic and ruthless regime.

Crowds in Tunis on Friday were shouting "We are not afraid!" even though the police were still shooting people. Sheer numbers and determination won the day.

Once again, the implications of what is happening are enormous and not just for other Arab states.

The sight of an uprising succeeding in the face of such odds is inspiring to all would-be revolutionaries across the globe.

If the Tunisians can do it, then so can we all!
Posted by The Vast Minority at 07:51