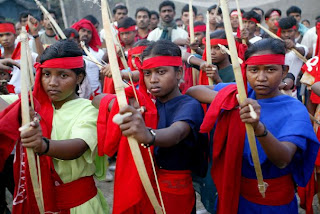 NAXALITE rebels are winning their war against the corrupt Indian state, a senior minister has admitted.

Reports the Indian Express: "A total of 713 civilians were killed by Naxalite groups in 2010, as compared to 591 the previous year, Home Minister P Chidambaram said on Tuesday while presenting a monthly report card.

"The Naxalite groups also enjoyed the upper hand vis-a-vis the security forces in terms of the number of people lost in the battle.

"The security forces lost 285 personnel, as compared to 317 in 2009 while the casualties on the Naxalites’ side was only 171, again significantly less than 219 in the previous year."

The report quotes him as adding: "It will be apparent that the Naxalites have not only spurned the offer of talks but have also escalated the conflict."

The Naxalite insurgency is a vast movement of the poor and landless in rural India against the rich capitalist elite.

The grassroots rebellion, which embraces tribal peoples in remote areas, continues to grow despite massive and brutal repression.
Posted by The Vast Minority at 23:21