Crunch day ahead in Egypt 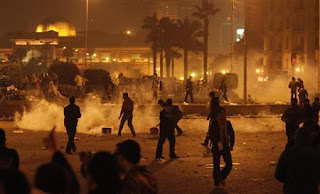 FRIDAY January 28 will go down as an historic day for the people of Egypt - one way or another.

A week of massive protests against the pro-US Mubarak regime is planned to culminate in an even bigger country-wide show of opposition.

While there are hopes this could spark a revolution, there are also fears that a bloodbath of horrific repression could also lie in store.

It was reported that the internet had gone down over Thursday night, stopping organisation of protests via Facebook or Twitter.

Said one message on Facebook on Thursday: "Government is planning war crimes tomorrow. Please contact the media, governments, leaders and everyone you can. Coverage and Awareness could help save lives in Friday protests."

Said another: "In several low-income parts of Cairo and Alexandria, government-hired thugs were seen to be splashing petroleum over parked cars.

"This to prepare for protests in which they'll light vehicles on fire when the time is right for them. They will charge through the streets with swords and caustic acid to splash on protesters placing blame of violence on protesters."

An idea of what protesters are facing can be gained from this shocking video showing a man being shot by police.

But solidarity in the population remains high - coptic christians are reported to be offering to protect mosques while their muslim neighbours are at prayer before this evening's demonstrations.

Biggest battles on Thursday were in Suez, where people battled police well into the night.

"This is a revolution," one 16-year-old protester said in Suez late on Thursday. "Every day we're coming back here."
Posted by The Vast Minority at 22:24