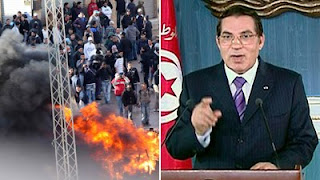 TUNISIAN dictator Ben Ali seems to have been toppled in an historic day for the North African nation - and the world.

The friend of Sarkozy, and the neoliberal powers in general, is reported to have fled as people power prevailed, though there were still warnings on Friday night that his party was clinging to power.

Dramatic events unfolded on Friday January 14, which were watched online around the world via the #sidibouzid hashtag on Twitter.

Ben Ali and his allies had hoped that his speech on Thursday promising reforms and civil liberties would defuse the situation.

Corporate media here were happy to swallow that line, with the UK's pseudo-radical Guardian shamefully reporting "a mood of general celebration in the streets of Tunis" with people apparently chanting "Viva Ben Ali!" and "Thank you Ben Ali!".

This was far from the truth, however, as the world can now plainly see.

Today hundreds of thousands of Tunisians took to the streets to demand that the corrupt dictator Ben Ali stand down.

Still desperate to cling to power and buy himself time, he sacked his whole government and promised parliamentary elections - but it was his blood the people were after.

As tensions mounted outside the Interior Ministry in Tunis, where young protesters climbed on the roof, reports came through that police were firing at the crowds.

It also became clear that the army were to play a key role, with a number of reports of soldiers fraternising with the protesters and declaring themselves on the side of the people.

Ultimately it was their seizure of power from a completely discredited dictator that sealed the success of the revolution.

As a result, it is possible that neoliberal propaganda organs will try to brand the uprising a "coup d'etat" and attack its legitimacy.

But, as things stand, this line of criticism does not appear to be in the least justified.

Historically, revolutions have often been won when the armed forces turn against a hated regime and refuse to impose a tyrant's rule.

A hundred people are thought to have been killed by Ben Ali's state during the last few days as it is - any attempt to enforce his control would have led to bloodshed on an unimaginable scale.

Make no mistake, the Tunisian Revolution of January 14 2011 - if confirmed - will be seen as a major historic event that will shake the very foundations of global corporate rule.

This is just the start!
Posted by The Vast Minority at 10:13