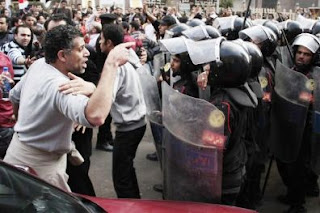 EGYPTIANS defied a clampdown by the authoritarian pro-US Mubarak regime and took to the streets again on Wednesday.

The momentum of the uprising now looks like continuing to a key period on Friday evening, after prayers, when huge nationwide protests are planned.

"Fresh clashes were also reported elsewhere in the country.

"At least six people have been killed in protests this week in Egypt, inspired by Tunisia’s revolution. Hundreds more have been detained."

It adds that at first the protests were about economic demands. People were protesting against poverty and unemployment, for lower prices and a more equal distribution of wealth.

But now the people were calling for the fall of the regime.
Posted by The Vast Minority at 23:29