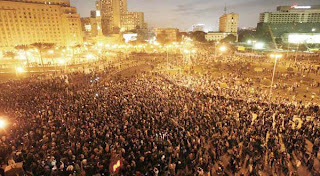 A MASS uprising has broken out in Egypt on the "Revolution Day" called by a wide range of opposition forces.

The unprecedented street insurrection against Mubarak's pro-US regime has been noticeably played down by neoliberal media, fearful of a pan-Arab intifada sparked by the Tunisian revolt.

And state repression has reportedly included the closing down of various websites in Egypt, allegedly including Twitter, where the hashtag #jan25 has been used to track the day's events. Others claimed the phone networks had simply been overwhelmed.

Inspiring incidents include this moment, caught on video, when an unarmed protester stands defiantly in front of an armoured water cannon vehicle.

One protester, 43-year-old lawyer Tareq el-Shabasi, told the Associated Press news agency: "I came here today willing to die, I have nothing to fear."

The AFP news agency reported that protesters had gathered outside the Supreme Court holding large signs that read: "Tunisia is the solution."

They then broke through lines of police and began to march through the streets, chanting: "Down with Mubarak."

Protesters in Tahrir Square said they would be spending the night there with the aim of forcing a revolution.

Live footage from Cairo has been streamed here.

In Alexandria there were reports of a march of 20,000 people including police officers who had joined the crowds.

At least one death has been reported during the day. He was named on the 'We Are All Khaled Said' Facebook page as Mustafa Reda Mahmoud Abdelfattah, 20 years old from Suez.

The page also contains unconfirmed rumours that Mubarak's son Gamal has fled to London with his family.

There were calls for all protesters to go to the Egyptian National TV and Radio station and break into it to reclaim control of a shamefully subservient media which did not even dare mention the day's protests.
Posted by The Vast Minority at 11:26