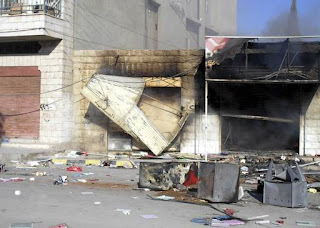 RIOTERS in the town of Maan in southern Jordan set fire to government buildings and police cars.

The protest against the killing of two men this week prompted the state to send security forces to the area to restore its control, reports Reuters.

Witnesses said hundreds of rioters angry at the authorities' failure to arrest the culprits behind Monday's killings spilt on to the streets of the desert town, setting a court building alight and damaging businesses.

"They hurled stones and burnt tyres in the main streets of the city. Other groups of rampaging masked youths burnt the local court," said one witness, Ibrahim Kreishan.

Security officials confirmed troubles had erupted and tear gas was used to disperse hundreds of people who had attacked government property and damaged private shops, added the report.

Maan is a tribal stronghold of over 40,000 people about 250 km (156 miles) south of the capital Amman, which is known for its defiance of central authority.
Posted by The Vast Minority at 23:15