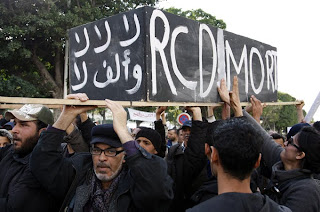 TUNISIANS are pushing for their revolution to completely sweep away the hated former regime.

While the new interim government tries to calm the situation, people have been out in the streets calling for a clear-out of everyone associated with deposed dictator Ben Ali's party.

Reports The Daily Telegraph: "Thousands mobbed the headquarters of the RCD, Tunisia's ruling party for several decades, yesterday chanting slogans and defying the security forces. Police fired shots in the air but the crowd continued to grow.

"The protesters on Mohamed V Avenue near the centre of Tunis, chanted: 'After Ben Ali and his wife, we want to bring down his thieves!' They also burned the logo of the party and carried banners saying: 'Government out!'

Adds Aljazeera: "Using a large steel cable, a government employee tore off the Arabic letters of the party's name from the facade.

"Amid shouts protesting against the transitional government, the crowd brandished signs reading: 'We are no longer afraid of you, traitors,' and 'RCD out!'.

"Soldiers fired shots in the air to keep the crowd away, while the police, blamed for shooting down demonstrators during a month of popular revolt against Ben Ali's regime, remained on the sidelines. 'I am with you. We are not going to shoot you. What matters is that the rally is peaceful," an army captain promised the crowd, who reacted with applause'."

The report also says there were protests in other towns across Tunisia.
Posted by The Vast Minority at 23:13