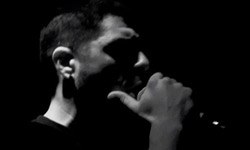 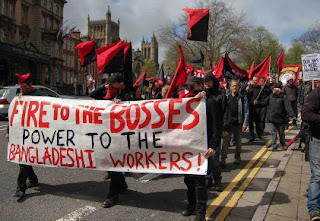 Anarchists in the English city of Bristol are standing united and defiant against the threat of major police repression.

Bristol Anarchist Federation have issued a powerful statement in response to an anti-anarchist witch-hunt launched by the local police force.

The right-wing Bristol Post newspaper is trying to whip up a reactionary lynch mob, urging its readers to "support the police in their campaign against anarchists".

This latest police/media declaration of war on freedom and dissent comes shortly after a successful attack by the Angry Foxes Cell on a nearly-complete police firearms centre in Portishead, near Bristol. The £16m centre was almost totally destroyed by fire. Nobody was hurt.

This was, of course, itself a reaction to rising levels of repression, both in Bristol (England's sixth biggest city) and globally.

The Cell's statement on Bristol Indymedia states: "In the City around us the lock down increases; there is a general atmosphere of rising fear and powerlessness; there is more and more surveillance, and security guards with handcuffs appear on more and more doors. Tensions across the world are simmering as people lose faith in the system."

The Bristol Post front page ran with the headline “Targeting the Enemy Within” and presented a report by Avon & Somerset Police with the Stalinesque title “Our Five Year Ambition”.

The cops said they were preparing a “crackdown on rioters and extremists” and were “monitoring several potentially dangerous groups”, with The Post claiming that the police had launched a series of operations to “gather intelligence about subversive organisations”.

As Bristol Anarchist Federation point out, the newspaper article conflates “domestic extremism” with rioting like the kind seen in Stokes Croft in 2011; acts of vandalism like the attack on the Evening Post building shortly afterwards and even the counter demonstration to a racist English Defence League march in July 2012.

Bristol AF say: "This is clearly an attempt by the Avon & Somerset Police to threaten anarchists and other radicals in Bristol. The Bristol radical community will potentially face increased levels of repression at the hands of the police.

"This could be anything from increased surveillance to being picked up for bogus charges while on demos; through to our homes being raided and possessions being seized.

"Without any evidence to track down the people they want to apprehend, the cops are likely to take out their frustration on public facing activists. Even the release of this report itself is an obvious attempt to scare them.

"We must not be driven into a state of paralysis for fear of the police. If they are expecting us to respond by being intimidated into inaction, by giving up on activism or by becoming fractured and turning on each other they are going to be sorely disappointed.

"Whilst this kind of repression does require a response, it will be a response routed in action, in solidarity and in unity. We need to be prepared, look out for each other and up our game when it comes to our own security.

"If the Police come knocking we will not answer their calls. We have nothing to tell and nothing to gain. Whilst we may not always agree with everyone’s tactics and philosophy amongst the wider radical scene the cops can Fuck off if they think we will turn on our comrades.

"The police and the state, as always, try to fracture us, they will try to prey on our weaknesses. We stand in unity and solidarity with all those who fight against oppression, capitalism and the state. We must create a culture of mutual aid and solidarity and most importantly: Resistance. We will support each other through whatever the state throws at us because we know that no matter what we will come out stronger."
Posted by The Vast Minority at 02:18