DESERT rebels have launched a revolutionary war in the Sahara.

The fight for a free Azawad has turned into an armed conflict after brutal attacks on the population by the US-backed state of Mali.

The MNLA says the Malian army suffered heavy losses and was forced to retreat.

Photos published on Facebook show the wreckage of a burnt-out MIG-21 jet shot down by the resistance fighters. 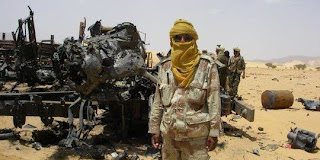 Mossa Ag Attaher, spokesman for the MNLA, told French newspaper Le Monde that the aim of the struggle was to liberate Azawad from Malian colonialism.