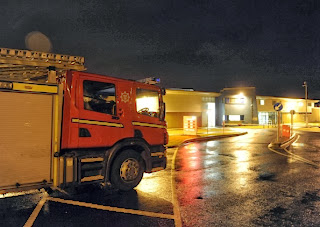 UP to 70 prisoners went on a riot at a privately-run jail in Scotland, firing snooker balls as missiles and setting fires.

The incident saw a number of inmates take control of one wing of Addiewell Prison in West Lothian for more than three hours.

The rebellion sparked a full emergency response from police, the Scottish Ambulance Service, and Lothian and Borders Fire and Rescue Service, reports The Scotsman.

Prisoners took control of the wing at around 4.30pm on Monday for more than three hours, before being surrounded.

Inmates used snooker balls as missiles and are reported to have set off multiple small fires before police regained control at around 7.45pm. There were no reported injuries to prisoners or staff.
Sources said it was a “serious” situation requiring a “full-scale response”.

One source said: “It was well out of control. Up to 70 prisoners were involved.”

Keep up to date with the global insurrection - follow VM on Twitter.
Posted by The Vast Minority at 23:18