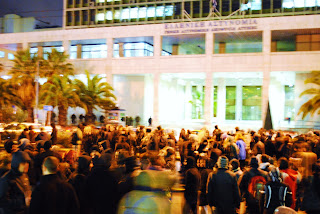 GREEK revolutionaries have stormed a radio station in Athens and broadcast a message of solidarity with comrades on trial.

Contra Info reports that the action on January 10 involved some 20 members of the solidarity assembly for the case of Revolutionary Struggle (Epanastatikos Agonas), whose trial is currently underway.

They entered the corporate radio station flash.gr on Kifisias Avenue and interrupted the station’s programme, to transmit their statement.

It adds: "Despite the fact that neither the station’s management, nor its staff asked officially any police intervention, scores of police (DIAS motorcycle units, squads such as MAT, plainclothes cops, among others) soon arrived on the spot and encircled the building.

"At about 14.00, after hours of being blocked inside the radio’s offices, anarchists who took part in the solidarity intervention were detained en masse and taken to the police headquarters on Alexandras Avenue: two prosecutors along with police squads stormed the radio station, forcing the comrades to exit the premises; all were handcuffed and held in police buses, while their mobile phones were confiscated."

The report says that as soon as the news was circulated, anarchists gathered opposite the police HQ, where a solidarity protest of approximately 100 people was staged.

A text released by the 20 detainees themselves states: "We have taken this action in an effort to break the wall of silence and the political order to gag the trial process and the political discourse of the defendants in the Revolutionary Struggle case.

"A confirmation of this gagging was the immediate reaction of police forces during the broadcast of our audio message with the words of the prosecuted for the same case.

"This mobilization of the executive and law enforcement authorities is indicative for anyone who resists, for whoever puts forward the total overthrow of the system through the social revolution, which is the only way to escape from the modern totalitarianism of the Troika of EU, ECB and IMF and their trustee, the Greek State, that have submitted the entire society in poverty and misery."

Keep up to date with the global insurrection - follow VM on Twitter.
Posted by The Vast Minority at 23:31