THE USA is heading towards being a police state, a lawyer warned this weekend after a brutal attack on Occupy protesters in Oakland.

Cathy Jones, an attorney with the NLG gave the following statement to Occupy Oakland’s media team: “Through everything that has happened since September, from Occupy to the acceleration of 'Bills' — NDAA, SOPA, PIPA, ACTA — never have I felt so helpless and enraged as I do tonight.

"These kids are heroes, and the rest of the country needs to open its collective eyes and grab what remains of its civil rights, because they are evaporating, quickly.

"Do you want to know what a police state looks like? Well, you sure as hell still do not unless you were watching our citizen journalists.”

Oakland Police deployed hundreds of thugs in riot gear so as to prevent Occupy Oakland from putting a building, vacant for 6 years with no plans for use, from being occupied and 're-purposed' as a community center.

Tear gas, batons and explosive devices were used against the protesters, many of whom suffered injuries at the hands of the neoliberal fascist enforcers. Some 400 people were arrested. 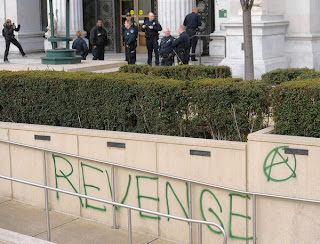