Take back the future! 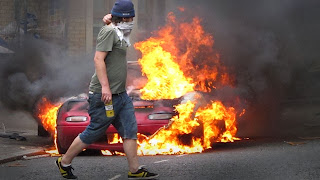 THE ECONOMIC crisis affecting the neoliberal-ruled world presents radicals with a golden opportunity which must be seized.


It writes: "In Europe, austerity packages have failed, whole economies have nearly defaulted and double dipped all over the place, people got angry, and the police beat them up.

"Whole new governments in Italy and Greece were installed without any popular mandate – these weren't coups of course, that would just be too twentieth century and Latin American – nope these were coalitions in the national interest headed up by utterly apolitical 'technocrats'.

"These paragons of virtue have predictably made the pleasuring of international finance their first prerogative.

"For a while the whole nature of what is occurring has been deliberately obscured, buried under a blizzard of economic jargon. But put simply what is at stake is what has always been at stake – power and wealth.

"While the 'free' market kept the elite in the style to which they were accustomed the free market itself was an unassailable idea – a basic fact of nature. The minute the markets turned on their makers the tune suddenly changed to one of 'regulation' with a farcical attempt to pin the blame on a few rogue traders and convince a sceptical populace that 'We're all in it together”. That is all wearing a bit thin.

"That crisis is now unfolding across the Western world – and in many ways for us lot (the radical left) this is a golden opportunity.

"The impoverishment of a whole sector of the population in order to maintain the rich lifestyles of a few (the cuts agenda) is an obvious morality tale that requires zero grounding in Marxist dogma to understand.

"The Occupy movement has made some bold strides in this direction – and there are encouraging signs of linking up with other struggles, notably the autonomous and rowdy electricians movement – the Sparks.

"Whether it's sleeping on the concrete outside St Pauls, wildcat strikes, chucking a molotov or taking a beating at the hands of a corrupt cop, we are all in this together. The only real alternative is the radical alternative. Take back the future!"

Keep up to date with the global insurrection - follow VM on Twitter.
Posted by The Vast Minority at 23:30