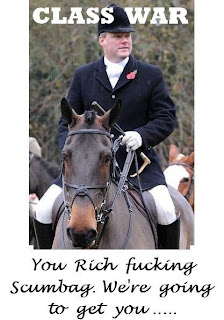 ANARCHISTS are set to invade the country estate of British banker Stephen Hester.

Class War founder Ian Bone is calling on his blog for an 'Occupy Hester' action on Sunday April 29, the date of an official open day for the forelock-tugging public to admire the arrogant fat cat's wealth.

The proposal has already been reported by The Guardian and bankers' website Square Mile.

"The next OPEN DAY there  is on APRIL 29th  – when for a mere £6 you can marvel at Stephen’s good luck and shake hands with one of his eight gardners…….no doubt the scullery maid will also be present.

"Soooooo……CLASS WAR are urging as many people as possible to come on the open day and chuck a few more quid into Hester’s maw. Fun and games assured. BE THERE – BEST FUN SINCE HENLEY.  Our French comrades will be visiting his ski lodge at Verbier on the same day. "

51-year -old Hester is chief executive of RBS, bailed out by the British taxpayers for £45 billion, and was this week forced to waive a £1m bonus after public outrage at fat cat greed.

Hester also enjoys the upper class hobby of murdering wildlife and his wife is a master of fox hounds in Warwickshire.