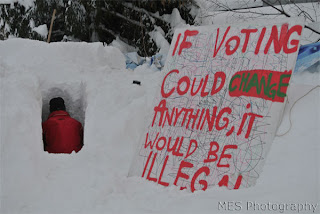 ANTI-CAPITALIST igloos have been built in Switzerland at a protest camp against the World Economic Forum.

Occupy WEF says on its website that it has contructed five of the ice homes at Davos, plus a couple of yurts and a field kitchen.

It adds: "Every year, self-proclaimed 'global leaders' allegedly committed to improving the state of the world meet up for the World Economic Forum (WEF) in the Swiss mountains to propagate their own businesses and network amongst the so-called global economic elite.

The protesters re calling for people to join them in Switzerland for a week of protests - updates via their Twitter account.

A video of the igloos being built can be seen below.