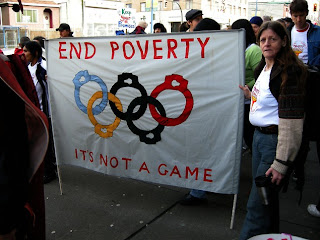 A BIG meeting to prepare for Countering the Olympics is being held in London later this month.

The event is being staged on Saturday January 28, from 10.30am to 5pm, at Toynbee Hall, Commercial Road, London E1 6LS.

"While the bigwigs are gaining billions, just what do the rest of us lose?

"This will be a day-long opportunity to investigate and interrogate all aspects of Olympic theft, debt, repression, pollution, corporatisation, sponsorship, displacement, and lack of community consultation.

"From NOGOE and Save Wanstead Flats to Vancouver and Athens, a range of local, national and international activist groups will share their stories. Then it’s up to us all to create the mass mobilisation needed to expose these Olympic-sized lies!

"Whether you’re an avid organiser or new to the game, now is the time to get involved."

Keep up to date with the global insurrection - follow VM on Twitter.
Posted by The Vast Minority at 23:19