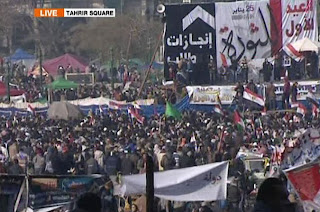 THOUSANDS of Egyptians are gathering in Cairo's Tahrir Square today to mark the anniversary of the January 25 revolution.

And amidst all the pride and celebration is anger that despite all the efforts made and lives lost, the country is still essentially ruled by the same elite.

The SCAF military junta has promised to step down once a president is in place in June, but there is little reason to think it will voluntarily step away from political control.

The brutality it has deployed against protesters in the last few months has been horribly reminiscent of the Mubarak regime that the revolution famously toppled.

Commented journalist rurned blogger Dima Khatib on Twitter: "A year has passed since #Jan25 with 945 people dead, more than 6,400 injured and not one police officer was sentenced. #Egypt”

A live blog of today's Tahrir protest is being  run by Aljazeera  and you can also follow the #jan25 hashtag on Twitter to see how events develop.

Keep up to date with the global insurrection - follow VM on Twitter.
Posted by The Vast Minority at 23:28