ECO-PROTESTERS have halted the construction of a chemical factory in China with mass action against the global industrial machine.

Reports the BBC: "On Friday, crowds opposed to the expansion attacked police in the city of Ningbo in Zhejiang province.

"Officials from Ningbo's city government announced on Sunday evening that work on the project would now not go ahead.

"Environmental protests have become more common in China. They come ahead of a once-in-a-decade change of national leaders in Beijing.

"Protesters gathered again in Ningbo on Sunday, marching on the offices of the district government. They are opposed to the expansion of the plant by a subsidiary of the China Petroleum and Chemical Corporation."

"The huge growth in China's economy has come at a huge environmental cost. Many Chinese are becoming more environmentally aware and are deeply concerned about pollution, correspondents say."

The emergence and success of a powerful grassroots environmental movement in the world's most populated state will surely act as a massive inspiration for others across the world fighting the foul forces of greed and death.
Posted by The Vast Minority at 13:54

Spirit of revolt is alive in London 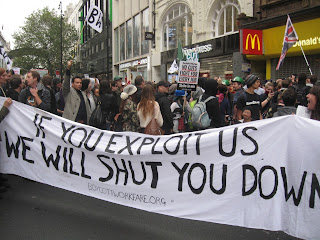 THE spirit of resistance to neoliberalism is alive and kicking in London, despite the attempts of the British state to stamp out dissent.

More than 150,000 people marched through the capital on Saturday October 20 to protest against the punitive austerity measures being imposed on the population by the coalition government.

And, off the official route of the TUC-organised demo, angry protesters took to Oxford Street, storming several businesses and forcing others to close.

They were reacting both to the foul workfare scheme, which sees the unemployed served up by the state to big business as slave labour, and to the blatant injustice of those same capitalists being allowed to avoid paying taxes, while the people are bled dry and public services slashed.

The protest began at Oxford Circus at about 2.45pm, when a small group took the centre of the road junction and staged a brief sit-down protest.

It then set off down Regent Street as a wildcat march, quickly attracting hundreds of others, as well as a samba band, as it snaked back up to Oxford Street and headed west towards Marble Arch.

A whole stream of businesses, notably including Boots, Starbucks and McDonald's, were targeted by fast-moving breakaways from the march - on several occasions protesters managed to get inside before the shutters came down or police lines prevented them.

Oxford Street traffic was brought to a standstill and the protest left in its wake a string of closed businesses - police were still protecting the capitalist outlets when the protest later returned along the same route.

The British state clearly hoped that, by handing out punitive prison sentences not only to the 2011 rioters but also to non-violent protesters like boat-race swimmer Trenton Oldfield, it could crush the spirit of rebellion in a British public numbed into conformity by the media circus of the Jubilee and Olympics.

But the enthusiasm and energy of  the "unauthorised" Oxford Street demo suggests it has failed in its repressive aim - the spirit on display bodes well for the resistance to the G8 meeting to be held in the UK in the summer of  2013.
Posted by The Vast Minority at 03:32

Jackboot comes down hard on Greece 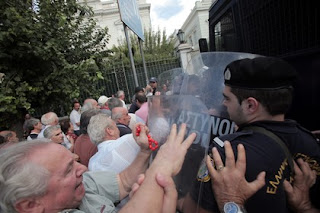 THE JACKBOOT of plutofascism is coming down hard on the people of Greece, first European victims of the new post-democratic capitalist order.

Ahead of the visit by German chancellor Angela Merkel on Tuesday October 9, authorities took the unprecedented step of banning "all gatherings and protests in the wider centre of Athens plus the city’s airport and the main thoroughfares to it", reports From The Greek Streets.

The physical presence of Merkel in Greece is so unnecessary and provocative, that the event seems stage-managed as part of an attempt to finally break the opposition to the neoliberal rape of the country.

It is no coincidence that at the same time as the fascist measures were being announced,  the head of the Eurogroup of finance ministers was warning Greece to speed up the economic measures being imposed on it by the global money system.

It is as if the elite want to send a message to the rest of Europe, and beyond - no matter how angry you get, no matter how hard you try to rise up against us, we have the physical means to keep you in your place.

Unfortunately for them, they have forgotten that resistance to tyranny springs from the deepest wells of the life force itself and can never be extinguished