Massacres are heading our way 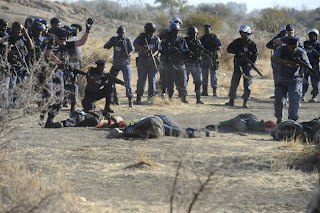 THE MASSACRE of striking miners in South Africa is a sickening foretaste of what is in store for us all as neoliberalism collapses under the weight of its own impossibilities.

Black lives are considered by the global elite to be of less importance than white ones, so the media impact of the mass murder has not been as great as if it had occurred in, say, France, or Britain.

But make no mistake - this sort of thing will also happen in Europe and North America, as the demise of capitalism accelerates.

The logical connections are there to be made. The company which owns the mine at Marikana, Lonmin, is itself a British company, for instance.

And this has, after all, always been the truth behind the facade of western 'democracy' - the authorities reserve the right to kill you if you threaten their hold on power.

Over the last 15 years or so plutocracy has set about turning itself into plutofascism to combat the inevitable global meltdown and uprising - and, to justify that, it has redefined its enemy. Dissent now equals terrorism.

One recent small example of this shift was experienced by two UK anarchists returning from a conference in Switzerland.

Reports Libcom: "On returning from the St Imier gathering, two anarchists, one a member of the UK Anarchist Federation, were detained for nearly two hours at Heathrow by SO15 (counter-terrorist) intelligence who initially refused to identify themselves to the detainees.

"During the detention, the anarchists were told that their normal rights did not apply, and had their names, addresses, email addresses, DNA, photographs and fingerprints taken. The detained anarchists were also forced to sign forms – which may or may not be legal – waiving their rights to silence and a solicitor. Police also conducted a thorough search of personal possessions, photocopied literature and passports and took information from phones and cameras.

"During the detention, the police constantly accused the anarchists of lying about involvement in criminal activity and alleged that they would be conducting follow-up police action against one of the detained anarchists.

"In addition to this, SO15 officers asked a number of inflammatory, irrelevant and offensive questions, including ‘what would you do if someone raped your mother?’ evidently in an attempt to cause emotional upset and illicit angry or violent responses. One member (28) who did not want to be named for fear of reprisals from the police, said “We were treated like criminals.

"I told them I went to the congress as I am an amateur journalist and I write articles about activism. They saw my note book, camera and Dictaphone but they said I was lying.” One officer said ‘You said you are an anarchist, I’ve seen anarchists on the news, they are violent, throw molotov cocktails and disrupt people’s lives not write articles”."

Fortunately, though, all the repression merely confirms to many more people that the only way ahead is the destruction of capitalism itself, and this instinctive resistance continues to bubble up all the time - for instance in Amiens in northern France earlier this week (see photo below). 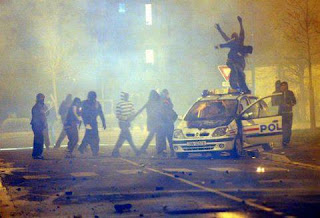