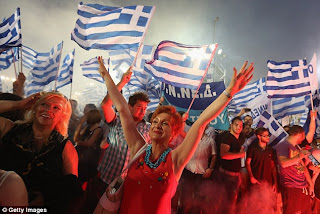 AN INVALUABLE insight into the mindset of the liberal bourgeoisie has been provided by an article in The Observer.

Helena Smith, Greek correspondent for the liberal UK publication, reports that the circle she frequents are not backing the radicals in the crucial general election.

She writes: "Everything has changed as certainties have crumbled. Many of my friends feel bewildered and fearful: bewildered that it should come to this, fearful of the dislocation from assurances of things past.

"In the topsy-turvy world that they now inhabit, almost all have decided that they will throw their political convictions to the winds.

"For the first time ever, they will vote conservative, casting their ballot in favour of New Democracy, the 'pro-European' party led by Antonis Samaras in the hope – no matter how slight – that Greece can be saved."

This is a lesson worth remembering - no matter how 'progressive' their rhetoric, the bourgeoisie have a vested interest in the continuation of the capitalist system and, when it comes to the crunch,  will do everything they can to protect it.

Make no mistake, they would prefer the 'security' of fascism to the possibility of real social change.

Fuck the liberals! Fuck the bourgeoisie! Viva la Revolución!
Posted by The Vast Minority at 07:49

Anarchists defiant in face of repression

ANARCHISTS are reacting with defiance to the latest clamp-down on their resistance by the forces of neoliberalism.

The June 2012 of the Dark Nights zine focuses on the international repression unleashed in recent days under the title of 'Operation Ardire'.

It reports: "At 4 o’clock in the morning of June 13th, 2012, the Special Operations Group [Raggruppamento Operativo Speciale, ROS) of the Carabinieri [paramilitary police] raided about forty homes in Italy, implementing the so-called ‘Operation Boldness’ (Operazione Ardire), a crackdown against people from the anarchist movement ordered by Manuela Comodi, public prosecutor of Perugia.

"According to the regime’s media, a total of 10 arrest warrants were issued — eight within Italy, one sent to Germany and one sent to Switzerland — while 24 suspects have been put under judicial investigation.

"The Italian bourgeois Press did not hesitate to connect the arrested with the 'anarcho-insurrectionist FAI/FRI'. [Informal Anarchist Federation / International Revolutionary Front]

"When work becomes a privilege and its lack brings waves of suicides, the state answer is to facilitate firings.

"More. When functionaries of the institutions soil themselves with the worst infamies, the state answer is to make their “crimes” expire.

"When the oil wells risk running dry in international conflicts, the state answer is to take part in the war.

"If the damned of the earth are forced to flee their countries and disembark on our shores, the state answer is to lock them up in concentration camps called CIE.

"If the rich keep getting richer and the poor keep getting poorer, the state answer is to protect the luxury of the former and suppress the desperation of the latter."
Posted by The Vast Minority at 07:31 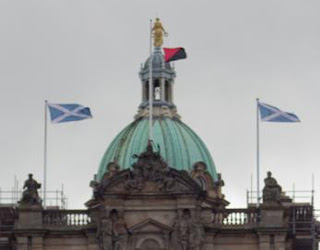 ANARCHISTS in Scotland have replaced the Union Jack on the HQ of the Bank of Scotland with their own red and black banner.

The daring stunt at the very visible building  in Edinburgh city centre sends out a powerful visual statement of resistance to the capitalist system and rejection of  all the sickening jubilee flag-waving.

The massive 200-year old building on The Mound overlooks East Princes Street Gardens and is close to Edinbugh Castle and just off the Royal Mile.
Posted by The Vast Minority at 06:54