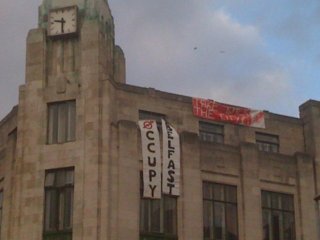 OCCUPY Belfast activists have taken over a high-profile disused bank in the Northern Ireland city centre.

Says a statement from the group: "Occupy Belfast have taken control of the Bank of Ireland on Royal Avenue in opposition to soaring homelessness, lack of affordable social housing and home repossessions.

"We hope today’s announcement will serve to initiate the building of a housing campaign. Building such a campaign will not be easy.

"To do so we need to begin to organise as workers, students and the unemployed in a real and meaningful way in our communities – to become involved in discussing, agreeing on and organising the tactics necessary to build resistance and a better society for all.

"No politician will do it for us. We hope the seizure of the Bank of Ireland will be the place to begin.

"Banks take our houses so we take their buildings. This is a repossession for the community! "

Blogger Slugger O'Toole writes: "On Saturday, Occupy activists entered the disused Bank of Ireland branch on the corner of Royal Avenue and North Street, which was the home of the Belfast Stock Exchange in the days when we still had one… at least until the late 1990s, if my memory is correct.

"They did not make their presence public until just before noon today [Monday], when they unfurled a number of banners from the top floor of the building, quickly attracting a crowd of curious onlookers, along with the PSNI and, for a brief period, keyholders and the Fire Brigade.

"They could not have picked a better metaphor for their critique of free-market democracy.

"Not only did is it the former home of a stock exchange, it also hosted a branch of an institution that has benefited from the controversial taxpayer-funded rescue package for profligate banks in the Republic.

"This gorgeous building, one of Belfast’s few pieces of art deco, has lain empty at one end of the City’s main shopping thoroughfare for almost half a decade.

"The property developers who bought it in 2007-ish were doubtless working on assumptions about the future of Northern Ireland property prices that have turned out to be grossly unrealistic.

"And so, one of the gateways to the city centre is overlooked by a decaying shell rather than something productive and well looked after. This is indeed a case where the logic of the market flies directly in the face of the common good." 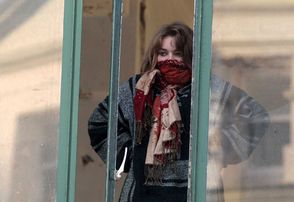