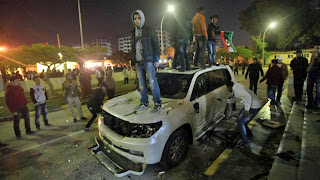 LIBYANS are rising up against the new western-backed regime and moving towards a real grassroots revolution.

Protesters ransacked the Transitional National Council's offices in Benghazi on Sunday, with a crowd of mostly young men throwing a grenade, smashing windows and forcing their way into the building while the council’s chairman, Mustafa Abdel-Jalil, was inside.

Reports the New York Times: "For months, youth groups with a range of complaints have been protesting against the Transitional National Council in Benghazi, the eastern city whose protests sparked the nine-month revolt and which once served as the rebel capital.

"Protests have cropped up elsewhere, too, including in Tripoli, the capital, where activists have erected a small tent city across from the prime minister’s office.

"Seeking to contain the fallout from the attack, Abdel-Hafidh Ghoga, the transitional council’s deputy chief, resigned Sunday, telling the Arabic satellite channel Al Jazeera, 'My resignation is for the benefit of the nation and is required at this stage.'

"Speaking to reporters in Benghazi on Sunday, Mr. Abdel-Jalil warned that continued protests could lead the country down a perilous path and pleaded with protesters to give the government more time."

Keep up to date with the global insurrection - follow VM on Twitter.
Posted by The Vast Minority at 23:20