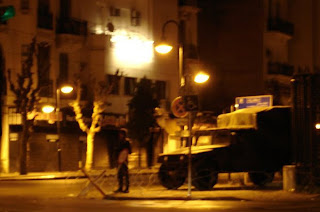 A FULL-SCALE uprising is breaking out in Tunisia, with huge numbers of people out on the streets all over the North African country.

Dictator Ben-Ali is clearly panicking - first he announced a massive jobs creation scheme, the sacking of the interior minister and the release of riot prisoners and then he sent the army out onto the streets and declared a curfew in Tunis.

Events are moving at a furious pace and western media are not providing the coverage the situation merits.

One good source of information is via Twitter under #sidibouzid.

Tweets report protesters being shot - with real bullets - in a growing number of towns as dissent turns into potential revolution.

Says one comment: "Remember that nobody is mobilising the masses in Tunisia. This is a spontaneous movement by people who are so FED UP with it all."

There is news of the army deploying in Msaken, two protesters being killed in Hammamet, bullets fired in Douar Hicher, a clash between police and protesters in Nabeul, a French citizen being killed.

A Freedom for Tunisia website features more than 100 videos of the uprising, including footage of a police station set on fire.

This video also shows scenes of chaos in the capital.

There are further reports that the states of Morocco, Libya and Jordan fear the Tunisian and Algerian rebellion will spread there.

A regularly updated blog can be found here.
Posted by The Vast Minority at 10:44