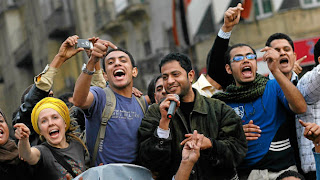 THE people's uprisings in Tunisia and Egypt herald the start of a new era for the whole world.

He says: One thing that is very important about these demonstrations and rebellions is that they were totally spontaneous and initiated by the masses.

"It is true that different political parties joined later, but the whole struggle was to a great extent a manifestation of the autonomous action of the masses.

"That is true also for the Islamist political groups. Maybe these groups think now that any election could bring them to power, but with revolting masses in the streets this is difficult, I think that the masses will actively refuse to submit again to any repressive power, but even if this could happen, people will not accept this time to be just subjects, most of all with fresh euphoric memories of the peak of freedom they won by their own struggle.

"No power could that easily force them to submit again to any kind of repressive regime.

"Egypt is the biggest country in the Middle East and its strategic role is very important.

"It is one of the main pillars of the US Middle East policy. Even if the old regime could survive for some time or even if the new regime would be pro-American, the pressure of the masses will be always there from now on.

"In a word, the US, the main supporter of the current regime, will suffer badly due to the revolt of the Egyptian masses.