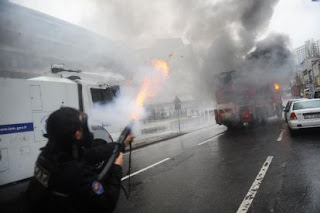 Reoprts Hurriyet: "The unrest erupted after about 2,000 people marched down İstiklal Avenue, Istanbul's main pedestrian area, to denounce the trial of some 150 people on charges of links to Kurdish Communities Union, or KCK, the alleged urban branch of the outlawed Kurdistan Workers' Party, or PKK.

"As the march ended and the crowd began to disperse, some 200 youths — many with their faces wrapped in scarves — launched a hail of stones at nearby buses, despite fellow demonstrators' attempts to stop them.

"The security forces responded with tear gas and water cannons, chasing the group into side streets. A Molotov cocktail hurled by protesters set ablaze a firefighting vehicle, which was badly damaged.

"The trial, which is being heard by a local court in Diyarbakır, was postponed Friday until Tuesday.

"The case is against 152 suspects, including 12 mayors of several southeastern Anatolian cities, all elected from the pro-Kurdish Peace and Democracy Party, or BDP, as well as many other local politicians."
Posted by The Vast Minority at 22:32